Justin Bartlett’s intricate, occult themed artwork has put a very unique spin on traditional metal iconography, and his art has graced the sleeves of artists like Gravetemple, Trap Them, Kvelertak, Moss & many more. M3 spoke to Justin about the perils of the music industry, and why we may not be seeing too many records adorned with his handcraft in the future… 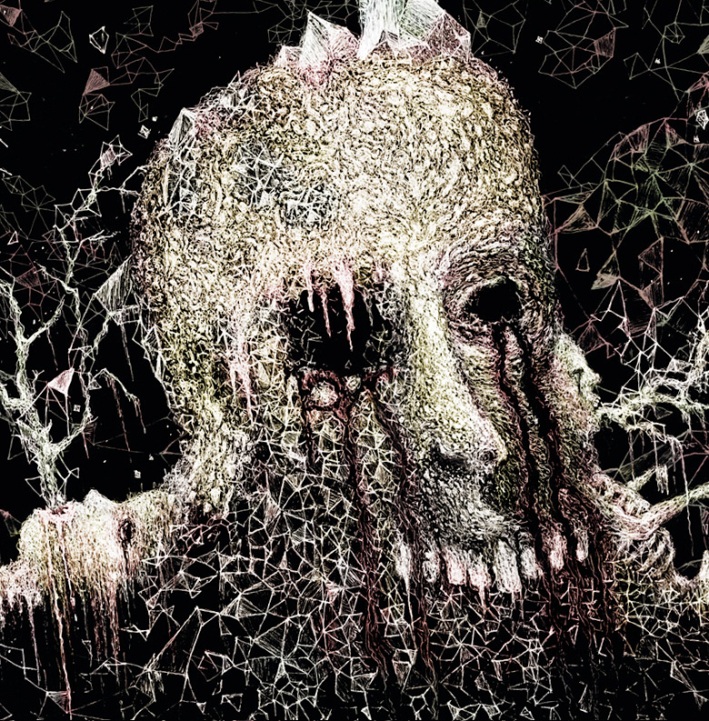 M3 – First of all, could you tell us a bit about yourself, and what it is that you do?
Justin Bartlett – Well, until the very end of 2011, I was a freelance illustrator and graphic designer working mainly in the music “industry”. But, I’ve also done work with some fashion lines, notably “Anti-Sweden Denim” from Norway, a few skateboard companies, magazines, and even “Wongraven Wine” which is a wine brand owned by Satyr from Satyricon.

Also like most other illustrators, I have had a bunch of well received art gallery shows in the US and Europe and have been featured in quite a few magazines and publications.

I am probably most well known for my style – and not exactly subject matter. I definitely draw a lot of the standard metal iconography such as goats, crosses, skulls, corpses, occult symbology, but for the majority of the time I draw in a bit of a different way than what is kind of a standard (solidified by Chris Moyen, et al.) Two of my favorite artists such as Away from Voivod and Nick Blinko from Rudimentary Peni are an influence of mine – Some people have said my work is kind of a blend of the two.. with maybe some Edward Gorey thrown in for good measure. But I’d like to think I am not too derivative from the way they draw.

What inspired you to focus on music related artwork? What is your own musical background?
I’ve been into music, and curious about music since I was about 10. I don’t mean just as a casual listener, I’d spend a lot of time going through magazines, music catalogs of discographies, zines, trade lists, and thanks lists to find out about new bands (this was before the instant gratification and accessibility of the internet). HOWEVER this interest never really manifested itself into any musical ability except for being able to play a d-beat maybe.

Possibly due to my love of music and wanting to be included in some way, along with the fact I can’t play worth a shit – inspired me to be involved with music in a visual way by creating album covers/layouts/shirts/posters.

How much creative control do you have over your artwork for musicians? Do they give you an idea of what they’d like, or just let you do your own thing?
I’d say that most of the time, I have a lot of creative control. Even when a band has an idea, it’s pretty loose so I can build upon that and even go in another direction if it’s warranted. Even if they say they know what they want, and I kind of have a different idea – I am usually able to steer them more into my direction if I think my idea is better.

There’s only been maybe ONE time where I disagreed a lot with the direction of the project – and that wasn’t for an illustration, it was album design and layout… and it wasn’t a huge deal, although I know it would have looked better with my idea.

Would you recommend illustration and design work as a good way for struggling musicians to earn an extra income?
I wouldn’t recommend that they work as an illustrator and/or designer in music, unless they also want to be a struggling visual creative as well. Working in music flat out sucks in terms of money. At least if you are someone like me, who spends a lot of time on their work, has a huge attention to detail, and has kind of an obscure style. Creatively it’s great, but that doesn’t put money on the table. Obviously I knew going into this full time that the money aspect was going to be difficult, working for yourself as a ‘freelance’ anything is always a struggle.. but I didn’t realize how different the pay and art usage/rights are compared between music and regular commercial illustration. After working on average between 60-80 hour weeks and barely being able to pay the bills (and even having to use my credit card to pay for rent a few times), I concluded financially as well as mentally, emotionally, I can’t do it anymore.

But as I said, the creative aspect was good and I have made somewhat of a name for myself. I’ve also met a lot of really cool people, who many turned into friends, and was involved in the creation of some killer pieces of music. Unfortunately or fortunately (depends on your frame of reference), I have to look to other arenas and do much less music-related work. I think I am at the point now of being a recognized “brand”, and I can switch to producing my own t-shirts, art, skateboards.

What would be your preferred medium to listen to music (eg. Vinyl, CD, tape, MP3 etc.), and why?
The “cult” thing to say would be I ONLY LISTEN TO VINYL… but let’s be honest….  Since I am in front of a computer all the time, I listen to a lot of MP3s. I rarely even buy CDs anymore, unless it’s one of my very favorite bands, some sort of extra special super die hard edition with bonus tracks. Hmmm, actually I just pre-ordered the Unholy Crucifix CD because it was $5, and that band is great.

Back to vinyl – I would say that it’s my preferred medium VISUALLY because the artwork is much larger… and it’s more of an experience having to take out the record, warm up your turntable, flip it over and all that physical interaction sort of stuff. I buy a considerable amount of records (maybe not as much as I used to), and it’s good to know that vinyl sales are actually rising and that people still really enjoy them.

Do you feel the idea of an album, as a piece of art that people will listen to from start to finish, has been undermined or forgotten about in the digital age?
Yes definitely, but that’s more with people who are casual listeners. People that are into METAL are really INTO METAL… and do view the album as an experience or journey and not just a set of random songs on a playlist.

I listen to most of my music now digitally, but I still listen from start to finish (unless it’s some playlist from a music blog).

Although I do try to support local businesses, they are in it to make a profit. So even if a store has a “metal” section, it will be full of popular crap that sells such as beard metal, party thrash, and metalcore….which are nothing I’d want to purchase or listen to.

Funny enough, I am part of the overall cause of my own income struggles!! This all has a direct correlation into trying to be a commissioned artist/illustrator/designer in the music industry – since there’s a huge loss of sales, there’s no budgets to pay artists what they are really worth if working in another area, such as fashion, publishing, comics, film.

It does seem that some bands and labels are finding ways to circumvent the declining sales through record stores, by using the internet to get in touch directly with their fans. I am not a fan of Pearl Jam for example, but they seem to do very well without having to rely on the record store as a middle man.

I think bands and labels need to rethink what an “album” is… specifically the idea as a compact disc as an album. It would seem like a better idea to offer an incentive against illegal downloading by sending your fans a t-shirt, poster, art print, frisbee, etc if they buy your album digitally through iTunes or some other download service. There will always be a core audience who buys LPs, and when you can get a digital download card a long with the album, perhaps this can help stabilize record stores.

What is your take on the current SOPA/ACTA controversy?
I think it was a much too far reaching and ambiguous set of laws – and was written for the benefit of media giants by themselves and their lobbyists. These are multinational corporations who for the most part make money on the lowest common denominator, and the lowest common denominator doesn’t really want to pay for music or movies that they download.

In a way the SOPA legislation was a last ditch effort at lazy media companies who put out garbage to somehow compensate for their lack of innovation and catering to the status quo. Most larger media companies just put out crap, because crap sells, it caters to a wide variety of people and that’s what brings in the sales.

“Combined, the organizations spent $182,500 on lobbying contracts with firms that lobbied solely on SOPA/PIPA, and an additional $2,022,500 on contracts with firms that lobbied on SOPA/PIPA in addition to a range of other issues. (When a disclosure form lists more than one lobbying issue, it is difficult to determine how much money was spent on each issue.)” … http://mediamatters.org/blog/201202030005

I’ll be totally honest, I’ve downloaded a lot of albums over the years, but nothing more than usually five a month or so – but if I enjoy something I will buy it on LP and CD (occasionally). I think that purchased nearly every album I really liked over the last year and a half since I went back to a “real” part time job and then a “real” full time job.

I am definitely for net neutrality (in fact I’ve had my images used for bootleg shirts),  so if there has to be regulation similar to SOPA/ACTA –  it needs to be much more intelligently written… and NOT written by media companies or their cohorts in congress.

Finally, what does the future hold for Justin Bartlett?
As I touched on before, I am on a break from working in music…. and have a decently paying (although boring) production art design job. Honestly, I have to move on to other fields if I want to make a living at this. I am in the middle of figuring out how to stick to selling my own products, and/or work in other areas of entertainment. I am sure I will still work on music projects from time to time, but not at all like I used to.

The music industry is rapidly changing. The internet has enabled widespread piracy, as well as a variety of new business and distribution models. We want to offer an engaged audience in and around the Euregion an opportunity to develop a coherent and detailed picture of the future of music distribution. On the 31st of May 2012 a music conference in Maastricht, consisting of oppositional debates, creative workshops and lectures, will provoke opportunities for intellectual stimulation, debate, as well as networking. We hope to utilise the skills and ideas of some of most forward thinking minds and operators in the industry in order to highlight some promising new ideas and areas which can be improved upon.
View all posts by M3 Event →